The Challenge of Challenging Behaviors

The Child Development Center has been experiencing a rash (dare I say, “Epidemic”?) of children who present with poor socialization, decreased attention requiring prompting and redirection, sensory and/or oppositional issues, extreme rudeness, dark thoughts and threats, obsessive activities, immaturity, and aggressiveness (physical, verbal or both). The children are not ‘autistic’. And, it’s not ‘just ADHD’.

One parent of such a child recently wrote that he was saddened by these disturbing developmental conditions in his otherwise amazing kid. When children do not ‘come out’ the way that we had anticipated, it brings heartbreak and disappointment.

Extremely disruptive displays are not merely frustrating.
They can be embarrassing and even cause depression.
In today’s world, that has become the journey of (too) many parents.

What Doesn’t Work
Corporal punishment was the traditional mainstay for ‘making children behave’. Thus, grandparents often complain that today’s parents are not firm enough. First, the price that is paid by utilization of either verbal or physical punishment is self-esteem – by both parties. Abusive actions, offhandedly employed in the last century, may prompt a Child Protective Services visit in this one. Second, affected youth appear to experience increased pain resistance. Eventually, that form of discipline goes unnoticed. Third, such a reaction is the exact opposite what we are trying to instill.

In the past months, we have examined a number of children whose medical pharmacopeia appeared proportional to their age. There was a 7 year-old taking three medications, and one teen was already getting Abilify, Risperidone, Geodon, Valproic acid, and Lamectal, among other pharmaceuticals. And, her psychiatrist was suggesting more. When does it stop?

I am certain that parents and doctors arrive at such multiple combinations of drugs honestly. Each symptom is met with another medicine. The patient is then drowning in chemical soup. What is the plan?

What Can Work
A medical workup is required. The prescribing physician is obliged to follow levels of anticonvulsants (for symptom adjustment), liver and kidney function (for drug elimination), blood count, and nutritional status.

In given patients, practitioners should consider fungal overgrowth, PANDAS, or Lyme disease. Screening for toxic substances has been a recent addition to our armamentarium. So new, perhaps, that such data is not necessarily that helpful, yet. Likewise, genetic technology has become available that better determines how patients metabolize various pharmaceutical preparations, but usefulness in clinical practice remains limited. To the extent that an astute clinician determines an underlying problem(s), great strides can be made toward amelioration of some disturbances.

Behavioral interventions are the proven treatment. It takes a professional therapist to get challenging children to display self-control. Common sense dictates that such juveniles require absolute consistency. One pre-adolescent demonstrated an uncanny ability to mock my consultation. Perhaps, the parents were thinking, “Now, you see how rude he is!” when they laughed it off. Regardless, their response validated the child’s disrespect.

One parent has developed her own form of pre-vigilance. Mom is able to ‘sense’ when her kids aren’t able to concentrate, and provides relief at the earliest sign of distractibility.

Rather than additional pharmaceutical preparations, doctors should consider which ones to decrease or discontinue. The list often contains drugs that were instituted for behaviors that are no longer at issue. Additionally, it can be helpful to consider less toxic medications or even supplements when the status quo is not doing the job.

Finding relief may be exasperating, with periods of improvement and regression. This is when patience and the knowledge that the child has the capacity to achieve necessary skills to ‘make it’ need to take precedence. Some parents choose home-schooling, special schooling, and less-than-hoped-for academic situations. Some must resort to medications.

This alteration in childhood development is not FUN. For many, it’s parenthood in the 21st Century. Consider that the best course is to ‘first, cause no harm’. 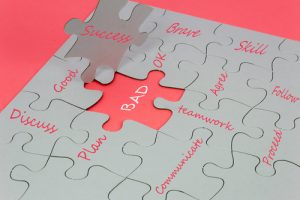