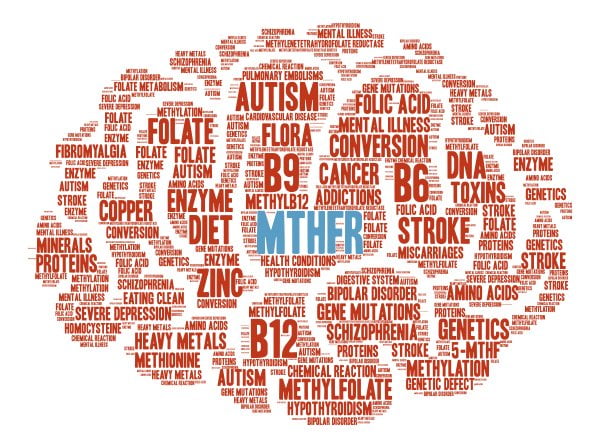 Findings presented this month by Johns Hopkins’ researchers showed that high levels of the vitamin increased the risk of autism, as did an excess of B12; and the combination increased the chances even more.Recent media attention regarding an association between supplemental folate (= folic acid) and the incidence of ASD has stimulated a fair amount of interest, with questions by patients, professionals, and acquaintances.

Folate
Highly processed foods are stripped of many nutrients, including folate. Additionally, antacid preparations decrease the absorption of many B vitamins.

First reported in the 1990’s, women who took daily supplementation around the time of conception and throughout pregnancy with a small amount (< 1/2 mg.) of folate experienced a decreased rate of central nervous system birth defects and developmental problems (review), including ASD .

Additional issues
Over 10 years ago, low folate levels in the cerebrospinal fluid were reported as a cause of autism, and there was a positive response to treatment with the active form of the vitamin.
Shortly thereafter, a proposed mechanism and discovery of antibodies against folic acid, especially in the CNS, were similarly implicated as a cause of developmental delay.
Plus, genetic alterations in the pathway leading to the active form of folate have been associated with an increased incidence of autism, as well.

Conclusion
Clearly, the addition of folate has been a major factor in decreasing the incidence of severe birth defects, such as spina bifida (opening in the spine), meningomyelocele (protruding sac), and hydrocephalus (water on the brain).

This latest study raises questions regarding ‘too much of a good thing’. Considering that ASD has reached epidemic numbers, it is time for doctors to begin screening women for folate and B12 levels, before and during pregnancy.