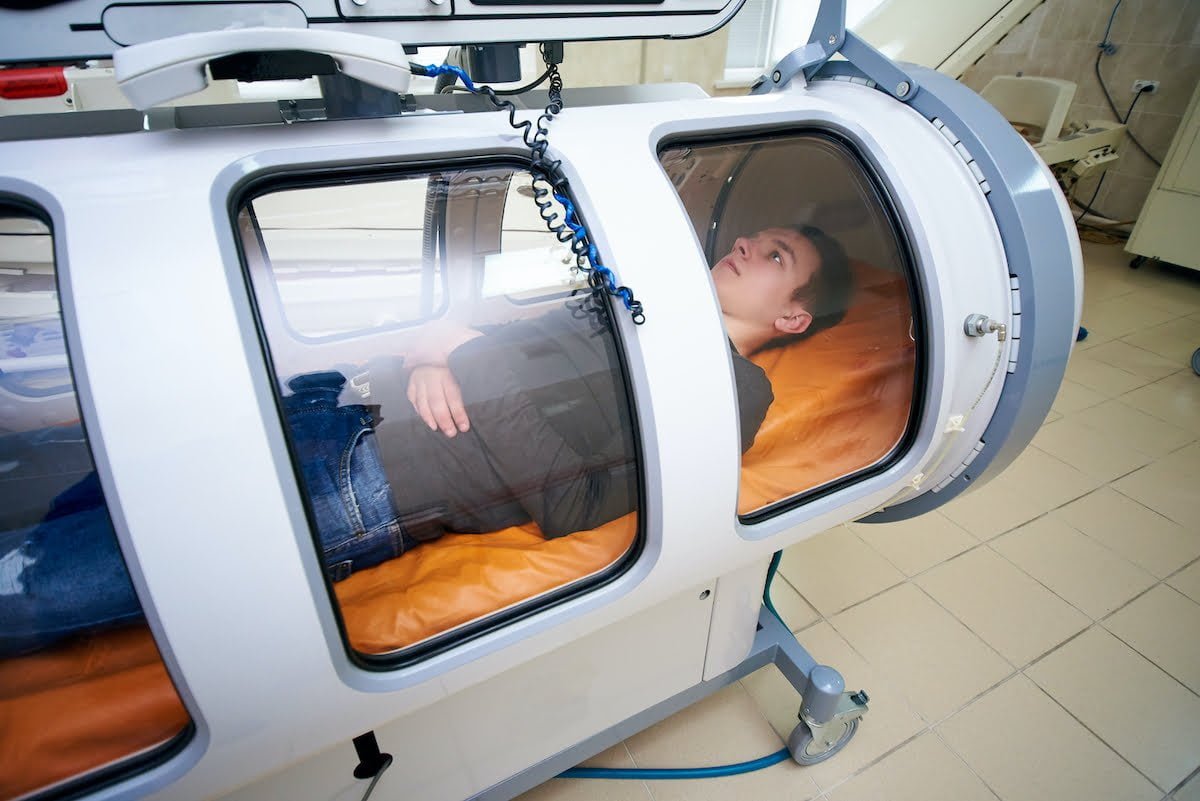 The use of HBOT for various neurologic conditions was a central focus at the most recent Medical Academy of Pediatric Needs conference. This is an update to the extensive review presented here nearly 4 years ago.

How HBOT is supposed to work:
It’s not rocket science. Because human blood is already 98% saturated in room air (21% O2), simply breathing higher concentrations provides very little improvement, and might even be detrimental. Adding pressure to the air that we breath helps dissolve some gases into the bloodstream. Therefore, in addition to the oxygen that is already attached to (and released from) our hemoglobin, more ‘nourishment’ can become available for the tissues.

‘Hard’ vs. ‘Soft’ Chambers:
Discussed here. More oxygen, more pressure, more danger, more expense, more schlepping. More effect? Suffice it to say, most people will not have the former in their own home.

Conditions with documented improvement:
There are 14 FDA Approved conditions for the use of HBOT, with supporting evidence of varying persuasiveness.

Decompression sickness.
Whether returning from too much or too little ambient pressure, there is improvement from ‘letting the cap off’ more slowly.

Non-healing wounds and those in diabetic patients.
The scientific literature showing improvement refers to high O2 (100%), as well as pressure (> 1.5 ATM); therefore, a ‘Hard’ chamber.

Cerebral palsy, stroke, and traumatic brain injury. Controversy about efficacy is unresolved.
For CP, improvement was demonstrated with the ‘High’ pressure type. A recent paper did not reproduce those results. Another study showed no significant difference when patents were exposed to the ‘Soft’ version. Parents, therapists and physicians, myself included, have observed positive results in many severely affected children.

Depression.
There is evidence of improvement after exposure to the ‘Hard’ chamber in one patient with post-traumatic stress disorder, plus other anecdotal reporting. That was also the finding in a group of patients suffering from depression after a stroke.

Hyperbaric Treatment and Autism Spectrum Disorder:
That’s the $2,000 –  $100,000+ dollar question. For the uninitiated, that represents the cost to try, or buy, the various forms of this treatment modality.

A few years ago, respected autism expert, Dr. Dan Rossignol documented improvement in a significant number of children. That was dampened shortly thereafter, when Dr. Granpeesheh, et. al. reported, “… that HBOT delivered at 24% oxygen at 1.3 atmospheric pressure does not result in a clinically significant improvement of the symptoms of Autistic Disorder.” A controversy has ensued, no doubt inflamed by the latter study authors’ statement that, “the results of this study corroborate the findings of the only other published study on HBOT… not the study authors’ interpretations of their findings.”

Yikes, what is a clinician to do? Or, the parents? At our scientific meetings, I have pressed some of the authors about the conflict. One doctor explained that, defending the ‘good’ outcome paper appears too proprietary. In the absence of stronger scientific proof, it shouldn’t appear that they are selling HBOT chambers. A different expert questioned whether there was a CARD (Centers For Autism and Related Disorders) conspiracy, with a bias against this intervention. We have enough of those controversies in autism.

Conclusions:
Depending on the family’s resources, parents who have “tried everything else” with few results may wish to explore HBOT. Adverse events are rare and mild. The FDA has issued a statement of caution against off-label use. I wish that they were as worried about antibiotics in our food.

When systemic health is restored, many of the signs and symptoms of the conditions included in the diagnosis of ASD abate. To the extent that extra pressure addresses the sensory patient, HBOT can be a valuable (albeit expensive) therapy. Anaerobic bacteria and yeast would tend to shun the oxygen rich, higher pressure environment of a chamber. And, on a percentage basis, even +1.3ATM added pressure enriches plasma. The latest buzz involves ‘dormant’, not dead, neuronal cells, which are waiting to be invigorated.

However, sustained results are often achieved with therapies, sensory diets, probiotics, appropriate supplements and medications, when indicated. One of our data-crunching tech professionals recently asked me, “Why can’t you guys figure out if one is better than the other? Or, if they complement each other?”

He’s right. We need to figure it out.