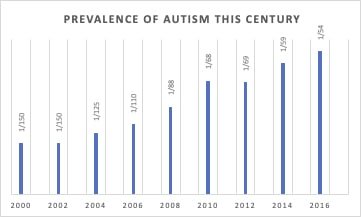 A recent headline offered, “Is the autism ‘epidemic’ over?” How about this claim, “US outpacing U.K. in autism rates”? Another one, a bit less dramatic, “Autism diagnoses level off in Britain after five-fold surge during the 1990s,” and more. They are all based upon this report, Prevalence and incidence rates of autism in the UK: time trend from 2004–2010 in children aged 8 years, in the October BMJ Open. The only mention of the term epidemic in that extensive research paper appears in the bibliography (only 3 citations included the term).

Webster: affecting or tending to affect a disproportionately large number of individuals within a population, community, or region at the same time.
Wikipedia: meaning “upon or above” …occurs when new cases of a certain disease, in a given human population, and during a given period, substantially exceed what is expected based on recent experience.
Notice, there is no scientific number or percentage increase. It’s basically, just a word.

Why are there quotations surrounding the word epidemic? If it isn’t an epidemic, why has it risen 5-6 times in one decade? Remember the “Swine Flu Epidemic”? Parents were even supposed to schlep their kids for a second dose of vaccine after “scientists found out” that not enough immunity was conferred by the first unnecessary dose. Big pharma made a plenty of money on that fiasco, I am certain. No one is making a bundle from autism, so there remains a controversy – even about the “E” word – in the midst of a dramatic rise in affected individuals.

Imagine that the epidemic is really over, as some headlines suggest. For one thing, even if NOT ONE MORE CHILD were to appear with ASD, there would still be millions of people with a medical condition who need research and treatment options, such as those that are afforded many other and sometimes, much rarer, disorders.

Perhaps this newspeak began with Uta Frith’s sentinel 2003 text, Autism: Explaining the enigma, in which she really explained nothing, by the way. So, even in 2013, it is not uncommon to read headlines such as, “Is autism really growing? Experts disagree.” If autism is ‘getting under control’, why do parents now worry about girls, who are increasingly seen as incorrectly diagnosed? The CDC recently reported US rates as high as 1 in 50.

Our children are certainly not experiencing the same situation as reported in the BMJ paper. “Given the apparent sudden halt in the rise in rates from early 2000 onwards – at least in the UK – the actual cause of the dramatic rise in the 1990s remains a mystery,” they write, emphasizing that the suggestion that it might be linked to the MMR vaccine has been conclusively ruled out.”
Well, at least they know that much!

Calling ASD an epidemic is not alarmist. We may fear the word, but it is a documented reality. Moreover, it stimulates interest, research and money that will lead to successful treatment. The correct question from our less-than-informed friends should be, not whether there is one, but why there is an Autism Epidemic.

The autism community needs and deserves more empathy and understanding. Sensationalized headlines don’t really offer hope when it is your family member who is affected.