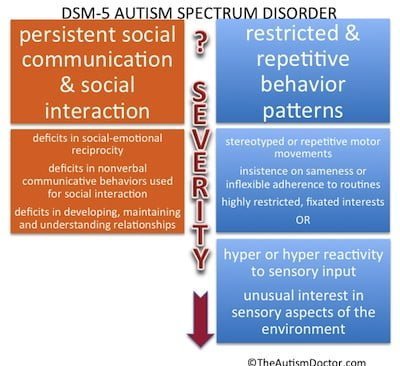 There were lots of media stories this week announcing that, because the criteria for the diagnosis of autism are changing in the new Diagnostic Manual (DSM V), there could be a decrease in the number of documented cases. This finding was based on a study by Dr. Fred Volkmar (a Yale University autism expert), in which he used 1990’s data to analyze the effect of a diagnostic shift, and was reported in the New York Times. Others have disagreed with his conclusion. I am one of them.

First, as I have been saying for years, don’t ask doctors or ‘experts’ whether the explosion of ASD is real. Ask 40+ year-old teachers, Speech & Language Therapists and Behavioral Therapists who have been witness to the epidemic rise in developmentally challenged youngsters. Especially ABA professionals, who are generally not covered under insurance, have proliferated… because they are the only proven therapy, and so knowledgeable parents seek their services.

The CDC studies that have documented the drastically increasing incidence of autism were not based on DSM criteria, they were based on the type of services that the patients had received. That means that the number of cases of ASD (regardless of diagnostic nomenclature), will not change in the real world. Calling the bubonic plague “an acute Yersinea infection” doesn’t change the incidence of the Black Death.

Furthermore, I believe that the Diagnostic and Statistical Manual of Mental Disorders (DSM – the ‘bible of psychiatry’)  is the incorrect storage bin for this diagnosis in the first place. Autism isn’t a separate mental condition, it is a medical disorder. Big difference. Diabetes is not in the DSM, schizophrenia is. Listing the diagnosis in this manner is not allowing for the paradigm shift that many brilliant researchers are discovering. The types of mental illness that are associated with the autoimmune condition thyroid disease, for example, are listed in that manner, not the other way around. So, in the future (?DSM VI), ASD will be a subcategory, listed under “the presence of mental symptoms that are judged to be the direct physiological consequences of a general medical condition.”

Why is popular media so quick to pronounce that there is no epidemic?
Fear, perhaps? Denial?

The study in question was presented at a conference in Iceland and is expected to be published some time this Spring. The DSM V does not come out until 2013. Must be a slow news day. Dr. Volkmar’s intent in his study was to warn that, based on the new criteria, many children might not qualify for necessary services. While that is of great concern to parents, educators, and therapists, it is probably an overstatement. At the Autism Society of America conference last year, the going concern was that the incidence of ASD could appear to increase under the new criteria. That is because diagnoses such as PDD-NOS and Asperger’s Syndrome would be rolled into the new category. Hmm… looks like they have another view (added 1/27/12).

So, if the proposed changes are utilized, who will be included and who won’t qualify for services? In my practice, where we help 30 or more children every week, every child that I can think of would still have the necessary criteria to qualify for appropriate interventions. Language in DSM V is slated to include “… neurodevelopmental disorders… feeding and eating disorders…Disruptive, impulse control and Conduct Disorders…Neurocognitive disorders.” Is anyone you know being left out? The next standard that appears to be of concern is the inclusion of ‘severity’. There is a great deal of leeway in the interpretation, especially considering that the hierarchy is defined by “requiring support, requiring substantial support, and requiring very substantial support.” Huh?

All this doesn’t make the DSM as inaccurate as it is irrelevant at this time. This is not a new debate. “Five” will be the first major revision to that manual in 17 years. The committees have been requesting input from outside sources for more than one year, and will be considering the new information when making a final decision.

The bottom line is this… I WISH that this diagnostic change would produce a decrease in cases! But, you know what? My practice will be just as busy the Monday after the change as the Friday before the new DSM V. Parents will seek assistance because there is some epidemic of childhood development that desperately needs to be addressed. Families will be just as confused about what is wrong with their child and doctors will not be able to help any better until we have more information about cause and treatment.