This post is my response to the April, 2012 Issue of the AAP news. The lead piece was entitled, ‘If not vaccination, then what?’ The second headline was, ‘How to end physician-patient relationship legally’. 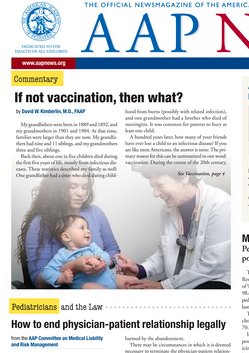 In the first article, a respected University of Alabama professor, Dr. David Kimberlin, presented the beneficial outcomes that childhood vaccinations have yielded. He detailed  the reduction in childhood deaths before the age of 5, improved health for all, and the proven stuff that the present schedule is perfectly safe for everyone. Oh, that’s right, he didn’t mention the fear of high fevers, seizures, diarrhea, or the specter of autism.

As I have written previously, I am old enough (63) to have had a childhood friend with paralysis from polio. I had an uncle who was blinded by measles as a child. And, as I practitioner, I experienced babies suffering the ravages of congenital rubella. I’m not sure what part of the membership Dr. K was addressing in the article, but it wasn’t me. Was he giving younger doctors more verbal ammunition? It would probably be a good idea for the practitioner to be able to answer those additional questions, as well.

In fact, the magazine never said a word about Autism Awareness Month, or even autism for that matter. This is in the same month when the CDC has pronounced that 1/88 children suffer from the disorder. There is this disconnect between what my Society is espousing and what my patients are experiencing. If there is an autism activist on the Editorial Board, it wasn’t evident. Apparently, April is also ‘Child Abuse Prevention Month’. I know this because there was an entire page devoted to that tragedy.

The other thing that irked me about this month’s magazine was the second lead article, entitled, ‘How to end physician-patient relationship legally’, written by the Committee on Medical Liability and Risk Management. It was ostensibly about patients who continually miss appointments. What’s the problem, doc, you will only see 5 instead of 6 patients that hour? Instead of writing about ways to gain patient confidence, educate and encourage good health (as the AAP recommends), and do a great job of taking care of children, the article explains how to safely get out from under an unreasonable or demanding family. “Perhaps the patient is non-compliant… does not share fundamental health care principles such as the need for… immunizations…”

Perhaps, I’m the only one to see a conspiracy here; one article was about vaccine efficacy and the other about how to fire your patients. Who could they be talking about, huh?

Confusion is being fueled by the dogma in the conventional medicine community. There must be some common ground where we all can meet to 1) help patients feel confident that the doctors understand what it is like to be a parent in today’s world and 2) have physicians who respect that modern parents are reading the Internet and are better educated than ever before.

In other posts on this topic, I had been concerned that ‘awareness’ wasn’t enough. Certainly, for the American Academy of Pediatrics, it would be a start.