It’s the time of year to review what I think are the important events that have made the news regarding child developmental issues, especially regarding ASD.

The Environmental Protection Agency has finally issued the first U.S. standards to cut mercury and other toxic emissions from coal-fired power plants. This represents government recognition that lead and mercury have negative effects on the population. Living near highways and power plants has been shown in previous studies to increase autism risk.

Researchers at the University of Pennsylvania reported that low birthweight infants (<4 lbs.) were 3 times more likely to develop autism. I believe that this strengthens the environmental component of etiology – the smaller the human, the more toxins have an effect.

In August, an Institute of Medicine study reported “no evidence that childhood vaccines cause autism, diabetes, facial palsy or episodes of asthma.” Also this year, a Pace Environmental Law Review study reported compensation for 83 cases of autism, “showing that the government has known about the autism-vaccine link” for a while. So, on one side are the experts and thousands of papers demonstrating safety, and on the other side are thousands of parents claiming proximity of cause. On neither side are the important prospective, randomized, double-blind and cross-over studies which would really prove the issue. What parent is going to agree to be in a study in which one child is offered careful observation and judicious vaccine protocols and another family experiences the present indifferent, non-specific and risky regimen? What IRB would allow one set of children to get many ‘shots’ even if they are sick and a control set that only gets the necessary vaccines and only if they are well?

University of Missouri doctors this year reported promising results in speech and language and social domains utilizing propanolol, a common blood pressure medicine. This is important because it is so difficult to address t 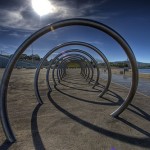 hese weaknesses in affected individuals. It appears that the ‘conventional’ medications that are utilized by most neurologists and psychiatrists to treat ASD symptoms are either ineffective or too risky to be used in children. So, to the traditional medical community who claim that they only treat according to current peer-reviewed articles, I say, “studies do not show” that the stuff you are using is indicated. How about some probiotics?

This past May, “the punishment machine,” a long-time treatment of disruptive behaviors was finally addressed. The inventor of a portable electroshock treatment (think, backpack with a punch) was forced to quit, though I’m not quite sure if similar interventions are not still being utilized at The Judge Rotenberg Center in Boston.

Several studies have documented differences in the workings of the frontal lobes of the brain, including size, cell number, and wiring problems which could explain many of the unusual signs and symptoms of autism. It’s not just a genetic problem. The role of epigenetics – the interaction of genes and the environment – continues to surface in conventional research. As in other autoimmune disorders, it appears that the susceptible individual gets attacked by a harsher-than-expected environment. The role of autoimmunity continues to gain traction as playing a key role in autism. There were articles this year about decreased genetic diversity locally in the brain of ASD individuals. Studies have documented missing or malfunctioning switches, which make important proteins. Hmm.. genes make proteins… genes turn on and off in response to various environmental stimuli… maybe this is an epigenetic epidemic? All epidemics have a ‘susceptibility’ factor. In the Middle Ages, for example, before modern medicine, EVERYONE didn’t get the plague!

Research continues to document the association between G-I issues and autism. Gut issues are important because, in a relatively non-verbal patient, improvement in the intestinal milieu can result in significant improvement in behavioral and other problems. “What do you do to help affected children?” is a common question that I encounter. My first answer is, “Fixing their gut really helps.”

In 2011, I treated hundreds of patients. Other CAM physicians addressed thousands more. We have helped almost all of the families and have helped to recover many children.

Finally, I have completed one full year of blogging. Thanks to all of my readers and especially the families who trust in my care.